I usually like to take time and reflect before posting, but I've had a distinct lack of blogging mojo this year, so I’m going to hit the keyboard whilst memories, emotions and motivation are still fresh and raw.
I've trained with Andy Beattie & Caroline Moles round the forest trails for over two years, with Caroline and me running the WHW race for the first time last year with Andy in support. This year Andy was going for his 1st goblet and Caroline her 2nd, with yours truly as part of the support effort.
Andy’s team was going to be Zoe and Ian Grey driving with me and Helen running support, unfortunately a family medical emergency meant Helen had to understandably call off on Friday evening. Caroline had a well-practiced support crew of 2 times WHW finisher Ian Anderson (2011 & “the wet year”); Steve Head; Lesley Jeffrey and WHW newbie Steve Carroll.
I have to confess it all felt a bit unreal in the final build up to the race this year. Last year I was completely emotionally, mentally and physically absorbed with the WHW race for 6 months. Whilst much of this year’s training and racing chat was WHW oriented and I knew I’d be supporting Andy as soon as he put in his entry in, it just felt different this year! I had a huge dose of pre-race nerves throughout last week; I don’t think I’d quite appreciated the responsibility of being part of a support crew up till that point. In fact I was definitely nervier as support than I was as a runner, strange but true.
With everyone but Andy working on Friday, our plan was to leave Dumfries around 8pm, collecting Andy in Lockerbie en route and arrive in Milngavie with ample time to register and get set up, but without too much time hanging around. Thanks to the generosity of Amanda Hamilton I’d managed to cadge a free hotel room overnight on the Friday, to allow Ian and I to get some kip before joining Zoe somewhere around Tyndrum the following afternoon, leaving Zoe to handle Balmaha, Beinglas and Auchtertyre solo.
The drive up was unremarkable, chatting through Andy’s support plan, ensuring we we’re au fait with exactly what he wanted. Andy is superbly fit and motivated; he’d banked a cracking Fling time and the only potential dark cloud was a recurrence of shin splints about a month ago. As a support crew we’d talked through options ranging from him smashing out a 21/22 hour finish through to a painful injury (shin split) induced 28/30 hour effort, and we thought we had covered all the bases and possible permutations.
Registration was smooth and efficient and once we’d transferred all Andy’s kit into Zoe’s van we encouraged him to sit down and spend as little time as possible on his feet. We were too far back to hear much of Ian Beattie’s race brief, but I think we pretty much knew it off by heart anyway. Time for photos, lots of wishing friends good luck and at 1am the hooter sounds and 193 intrepid souls set of on their WHW race journey.
Once we’d clapped them all down the high street, Zoe headed off to get some kip before her first meet with Andy at Balmaha and Ian and I headed for the Premier Inn for a decent night’s rest. Contrasting fortunes for the two halves of the team - Zoe got no sleep, Andy had a tough time before Balmaha, the midges were appalling, and Ian and I had a good sleep a long lie and a decent breakfast before a leisurely drive to Tyndrum. Text updates from Zoe, suggested that Andy had a low point just before Balmaha, but had picked up and that with Paul Giblin and Robbie Britton heading for a course record time, I’d be running with Andy from Bridge of Orchy.
We met Zoe in the tourist information car park at Tyndrum and switched all the kit back into my car, or not quite all the kit as it transpired, more of that later. We walked over to Brodie’s store to cheer Andy up the hill, also catching Gayle Tait, who was looking strong and Jo Rae who was having a nightmare race with tummy trouble. Zoe than headed off to try to get some sleep and Ian and I set of for Bridge of Orchy. We parked in the top car park and walked down to the check point at the bridge, ably manned by Norma Bone and Sean Stone, double checking that Andy was eligible for support (you cannot have a support runner, if you are within 4 hours of the race leader), we settled down to wait. Andy and Caroline arrived in 13:32 and 13:31 respectively and both still smiling. We sat Andy down, replaced water bottles and snack bag, changed his buff, tried to scrape the dead midges off his face and neck, let him shovel in a rice pudding and steeled him for the climb up Murdo’s Mount.


Caroline and her support (Steve & Lesley) passed us on the climb up, and we didn’t see then again until Glencoe. Andy’s shins were holding out but his heels were giving him a lot of pain, so having held a steady yomp up the hill, the downhill was quite painful. We ran most of the way to Forest Lodge and the first slope up onto Rannoch Moor, changing to a run 50 walk 50 on the slopes and walking the steeper sections, but with increasing pain from his heels the walks were becoming longer and the runs correspondingly slower. Around 4 miles from Glencoe we were mostly walking and the phrase I’m bollocksed was uttered for the first time. We know each other well and generally know how to push each other along when one of us is lacking in oomph or motivation, but it was clear that this was more than lack of mojo and that overwhelming tiredness was playing a major part.

The steps down through the trees were particularly tough going and the final short climb up to the fire road equally so. With the first tendrils of dawn creeping over the horizon and twinkling head torches dotting the massive bulk of Ben Nevis across the glen, the more runnable terrain of the fire road was a welcome sight. To Andy’s eternal credit he managed a healthy run pretty much all the way down to Braveheart Car Park, and we were not passed by anyone. I’m sure by this stage my chat had become repetitive and dull, or even more repetitive and dull than usual.
“Not far to the street lights”, “not far to the 30mph signs”, “not far to the roundabout now”, “only 300 yards after the roundabout”. I was aware of another runner not far behind, but Andy managed to hold him off, coming in in 26:57:16, with the other runner 10 seconds behind, job done 104th place.
At no stage in our 13 hours together did Andy even once mention pulling out or stopping, and  it was a genuine pleasure to see him collect his goblet on Sunday.
Reflections
I’ve not spoken to Andy since the event, so I’m not sure how he feels about his time? However just completing this event is a major achievement by any standard and he should be justifiably proud.
I wouldn’t recommend having only one support runner for most of the second half, while the running and the distance were no problem, keeping up the chat solo for that length of time is challenging. Having your runner(s) join you on the Saturday does, however seem eminently sensible as they are fresh rather than having endured a night without sleep.

Zoe and Ian are stars on support duties, enthusiastic, capable and knowledgeable and seeming to know just when to be cruel and when to be kind, it’s a pleasure to crew and run with them.
All credit must go to Race Director Ian Beattie and his team of enthusiastic marshals’ and helpers, who put on another splendid event, thanks and well done.

What about the future? Well I never said I wouldn’t run the WHW race again!
Posted by Unknown at 08:47 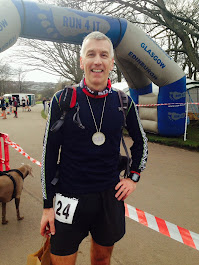